The team of Haus der Kunst mourns the death of Okwui Enwezor.

During his tenure as director of Haus der Kunst, from 2011 to 2018, it filled us with pride and joy to accompany Okwui Enwezor as his vision of artistic excellence was transformed into reality. We are extremely grateful for this extension to our perspective.

The name Okwui Enwezor stands for the conviction that the developmental lines of contemporary art are global and multi-layered and cannot be limited by geographic, conceptual and cultural boundaries. This conviction also became the guiding principle of Haus der Kunst.

Okwui Enwezor understood himself as a curator, author and scholar. Most of his exhibitions were accompanied by publications. His intellectual legacy also includes the questions formulated in his essays.

Even after learning of his illness in fall of 2015, Okwui Enwezor continued to work hard to realize "Postwar" and later exhibitions. His work was his source of strength and inspiration.

The brilliant exhibition “El Anatsui. Triumphant Scale,” which opened just days ago and was developed by Okwui Enwezor over many years, is his farewell gift to the city of Munich, to an international audience and to the professional world.

The team of Haus der Kunst mourns the death of Okwui Enwezor. Our thoughts are with his family and his close friends. 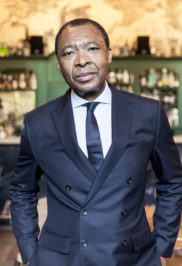