The “Fujiko Nakaya. Nebel Leben” survey exhibition concluded with a one-day symposium aiming to tackle, discuss and share her essential contribution to a renewed understanding of art history from an array of different perspectives. Nakaya’s exploratory and collaborative approach to art, technology and ecology has created a multiverse of ideas that resonate today with urgent questions about our interconnectedness with the environment. The symposium featured screenings, presentations and conversations with international scholars, museum curators and artists whose diverse contributions branch out into Nakaya’s multiverse and create new connections to her networked thinking and visionary art practice.

Iwanami Productions was a film production company founded by Ukichiro Nakaya in 1950, specializing in educational and scientific films in biology, chemistry, entomology, and public health. Until today, the multifocal work of her father is an important inspiration to Fujiko Nakaya. Using new cinematographic and narrative techniques, as well as a focus on the subjectivity of the depicted characters, Iwanami shaped a distinct style that influenced not only the active postwar Japanese scene, but also is unique in the international documentary filmmaking realm.

The panel on Iwanami Films was realized in collaboration with the Goethe-Institut Tokyo.

Jenna Sutela introduces her research-based practice that builds on ideas about interconnectedness in the spirit of Fujiko Nakaya. Exemplified by the sculpture HMO Nutrix, 2022, on view at Haus der Kunst, and the premier of her science poetic audiovisual work Milky Ways, 2022, Sutela’s talk is based on involving micro-organisms in her working process. Inspired by among others astrobiology and hydrofeminism, which understands human bodies as connected to the natural world through water, Sutela’s art reflects on our deep entanglement with the environment and with each other.

In his talk, Philippe Rahm shows how complex the interplay between weather and architecture is. Nakaya’s fog landscapes create spatial conditions that keep presence and absence in constant interplay and establish a dialogical relationship with form – both bodies and architectural elements. Through his notion of architecture as the design of atmosphere, Rahm reveals a new approach to Nakaya’s work and our built environment.

The conversation focuses on Nakaya’s networked thinking – from early TV networks to global digital networks. Building on notions of media ecologies and elemental media and along the work of Fujiko Nakaya, this panel develops an idea of technology that is not separate from nature, humans, and organic matter.

Helmut Völter, Artist
with an introduction by Sarah Johanna Theurer

Graphic designer and artist Helmut Völter introduces the history of scientific cloud photography. The talk focuses on the dual character of scientific images as rational evidence and aesthetic object, as it is introduced in the exhibtion “Nebel Leben” through the materials of the physicist and father of the artist, Ukichiro Nakaya. Through the examination of the cloud studies of Japanese physicist and artist Masano Abe, Völter develops a particular and new perspective on the cloud in media, art and science.

The conversation focuses on the multidimensional perception of Nakaya’s fog sculptures. The curators and writers share their respective experiences from working with the artist, creating a context beyond canonical art histories. 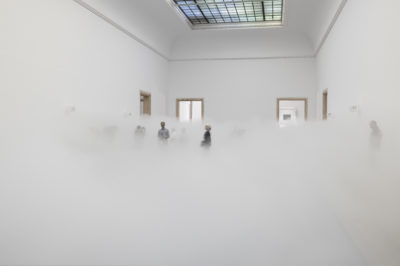