Scale as Political Tool: Louise Bourgeois's "Cells" as a Mode of Living

Watch Scale as Political Tool: Louise Bourgeois's "Cells" as a Mode of Living

About Scale as Political Tool: Louise Bourgeois's "Cells" as a Mode of Living%

Cells are microorganisms; Louise Bourgeois's "Cells" are inhabitable spaces, or representations of them. Between the microscopic world's invisibility and the vastness of the macroscopic, the "Cells" propose to look at the world in reconciliation of these two extremes of scale. In addition, these works, which integrate sculpture with architecture, challenge the viewer's position as one outside the work – potentially judgmental, indifferent or admiring, but not engaged. Due to the possibility of entering the works (or the desire they elicit to do so), the pieces also obtain a moving quality. These three ways of going against art-historical decorum has been an inspiration for subsequent generations of artists.

Being less interested in the concept of "influence" than in that of affiliation-in-difference, Mieke Bal will consider the shadow plays of Indian artist Nalini Malani as an example of art that is partly inspired by and affiliated with Bourgeois's "Cells", yet is still very different from it. Bal thus hopes to demonstrate a methodology of comparison that enhances difference. Artists cannot "follow" another artist; this would make their work formalistic and derivative. But they can engage in a dialogue with a predecessor, which both creates a community of artistic thought and a sharper eye for the special qualities of each artist participating in such a dialogue.

Mieke Bal is a cultural theorist, critic, and video artist. Her interests range from seventeenth-century art to contemporary art and modern literature, feminism, migratory culture, mental illness, and the critique of capitalism. Her books include "Of What One Cannot Speak" (2010) and "A Mieke Bal Reader" (2006). Her series of video installations "Madame B", with Michelle Williams Gamaker, is currently touring internationally. 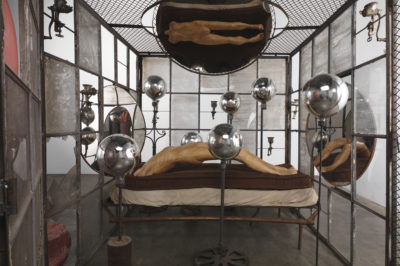