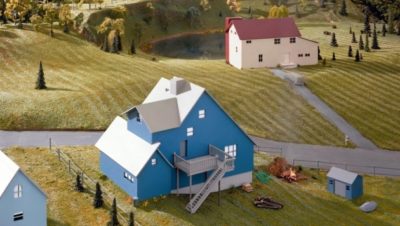 James Casebere's photographic works explore architectural subjects that emerge from a singular approach of production. They are photographs of self-made architectural models in which completely imagined scenes are transposed into a pictorial record. Casebere thus generates images that hover somewhere between the fugitive and the sublime, between the representational and the staged. The new, colorful works, including the "Blue House" edition that Casebere specifically made for the exhibition at Haus der Kunst, probe the effects of recent social occurrences in the United States such as the subprime mortgage crisis, the propagation of planned suburban communities, and especially climate change. Casebere himself states in respect to the images of the series, that it "suggests the mythic 'Morning in America' of the Ronald Reagan era in the United States, one characterized by the optimism of distorted growth, speculative real estate, and inflated financial markets. A hilltop assembly anxiously awaits the scorching summer. Aren't suburbs, exurbs, and citiesall variants of refuge? This town is asleep, but about to awaken to the buzz of a myriad of vehicles. Busy little ants are about to pour out of every opening and scurry off to nowhere. They're stranded on a mound above an otherwise drowned world. This is the existential tipping point of the global citizen and the collective straining of identities toward a new unknown." 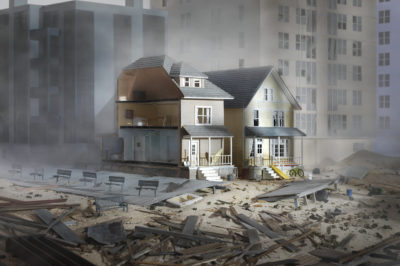