Fingers of Fate" / "Hearts of Plane 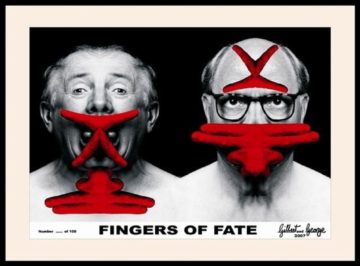 Information about Fingers of Fate" / "Hearts of Plane

In both images, the artist duo Gilbert & George portray themselves. In "Fingers of Fate", they use their fingers as an independent abstract sign language. Set against an otherwise black-and-white composition, the bright red hieroglyphic-like elements seem to transmit secret codes. At the same time, the fingers can be viewed as a decoration or as a disguise for their faces. The edition "Hearts of Plane" however, shows Gilbert & George with naked torsos that are obscured by a tangle of thin sycamore tree branches that appear to grow out of the bodies. The red heart mentioned in the title stands out from the yellow grid of branches. On Gilbert, it almost looks like a playing card, while on George it recalls the war paint of an Indian chief.

Both motifs present Gilbert & George's expressive exploration of themselves and their bodies. Like all their works, these editions are confrontations that are fascinating in their intensity. The edition with two motifs was published on the occasion of "Gilbert & George: The Great Exhibition", which was on view in Haus der Kunst from 11.06.-09.09.07 and included 200 works from 40 years of artistic creation. 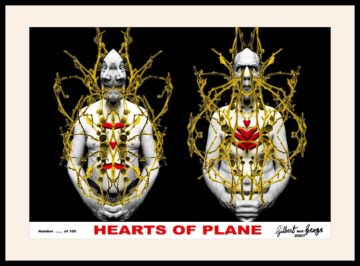