Dumb Type’s modus operandi is normally characterized by an exploration the use of media and human body, as well as of the relationship between the art object and the audience. The group's name stemmed from the uncritical openness with which Japanese society embraced Western influences during the so-called “economic bubble” of the 1980s; which in turn created a superficial (later “superflat”) society conditioned by mass media, consumerism and technology. Within said society – whose reach has subsequently encompassed the entire globe via many of the technologies first pioneered in Japan – individuals are “overwhelmed with information yet unaware of anything”, and desire itself goes hand-in-hand with despair. The "dumb" in Dumb Type therefore plays upon the word’s double meaning in English: both mute and stupid.

After a series of small, site-specific interventions and performances in Japan, Dumb Type began to achieve internationally success with the performance 036 Pleasure Life (later reconfigured and retitled simply as Pleasure Life, 1987-89), whose dystopian mise-en-scene of a contemporary city run amok by technological systems received critical praise at several large international performance festivals at the end of the decade. Subsequent performances became even more technically and conceptually complex, integrating performance, installation, video, sound and printed material into immersive environments in which the audience themselves felt complicit in the actions on stage. In pH (1990–93) for example, they were perched precariously on either side of a white linoleum stage, affording them an almost panoptic view of the performers below. Even more radically, the performance S/N (1992-96) challenged the very line between fiction and reality via its unusual ‘live’ talk show style, in which one of the group’s founders, Teiji Furuhashi, came out as both gay and HIV positive.

After Furuhashi’s tragic passing in 1995, Dumb Type produced the work OR (1997-99), that reflected upon the various religious, philosophical, medical, cultural, or emotional binaries which come to determine our lives, as well as the increasing use of technologies in delimiting these distinctions (especially in regards to ideas of “living” and “death”). Subsequent performances built upon these ideas in exploring the gap between actual and artificial memories (Memorandum, 1999-2003), as well as sardonically meditating on the limits and ubiquity of information and its impact on our perceptions of space/s (Voyage, 2002-09).

In addition to working in theatres, Dumb Type also created installations for a variety of art spaces from the mid-1990s onwards. This included the immersive multi-channel installation The Lovers (1994) that was acquired the New York’s Museum of Modern Art, as well as museum adaptations and reinterpretations of existing performances (Or, 1997; Voyages, 2004; MEMORANDUM OR VOYAGE, 2014; pH, 2018). More recently, the group has also created a series of new installations, whose form and content can be adapted to the social and political specifics of their exhibition (Playback, 1989-2022; Trace/React II, 2020). In 2022, concurrent to their exhibition in Haus der Kunst, Dumb Type will also represent Japan at the 59th Biennale di Venezia; creating a new, site-specific commission for Takamasa Yoshizaka’s iconic pavilion. 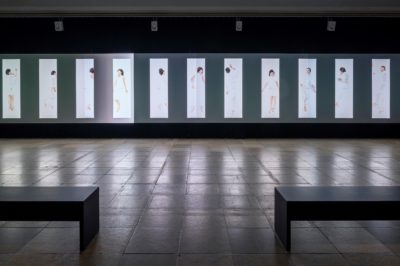