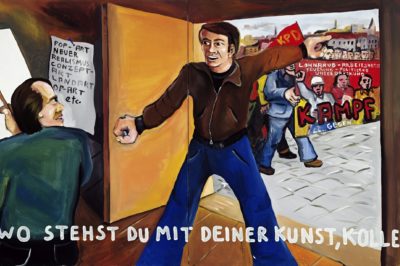 In her talk, the French author, art critic and modern and contemporary art expert will speak about the artist Jörg Immendorff and his work.

“Which 20th century artist so radically exposed himself to the adventure of the avant-garde before finally establishing himself as a painter prince? Who incorporated so many cultural quotations into his work, or assembled such a multitude of historical and contemporary personalities in his paintings? Who so drastically juxtaposed his own life and that of the art market with the world as it truly is? Jörg Immendorff. One day, I entered one of his cafés - and since then there has been no end my slipping on the glass-smooth parquet of these paintings again and again and bouncing off the tables.” - Catherine Millet

Following her lecture, Catherine Millet will partake in a discussion with the French curator and critic Thibaut de Ruyter.

In French with simultaneous German translation.

Catherine Millet has been an esteemed art critic for many years. In 1972, the expert in modern and contemporary art founded the art magazine art press, for which she still serves as editor-in-chief in Paris. In addition, she has curated numerous international exhibitions, including the 1995 Venice Biennale.

Thibaut de Ruyter is a French curator and critic; he has lived and worked in Berlin since 2001.

The event is a collaboration with the Institut Français.