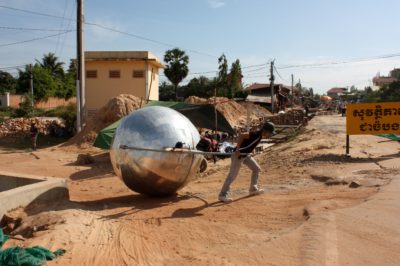 6 pm opening of the exhibition

Live-Performance
Anida Yoeu Ali, The Buddhist Bug Project
The Buddhist Bug series is presented in different forms since 2009 - video, photography, installation and live performance. The central piece is an elongated saffron-orange tubular structure with regularly interspersed circular hoops, that is activated during a performance. The Bug was first realized during Ali’s graduate studies at the School of the Art Institute Chicago in 2009 and has since been shown internationally in museums and exhibitions.
In its latest iteration at the Haus der Kunst, the Bug speaks to the diasporic nature of the Southeast Asia Performance Collection and the digital exchange of materials in the contemporary era, and the capacity of bringing to the context of European art institutions divergent but profoundly resonant narratives of artistic strategies that reflect on histories of struggle against dictatorship.

The opening is part of the symposium Pathways of Performativity in Contemporary Southeast Asian Art, a curated programme by Eva Bentcheva, Annie Jael Kwan and Damian Lentini, with the generous support of the Goethe-Institut.